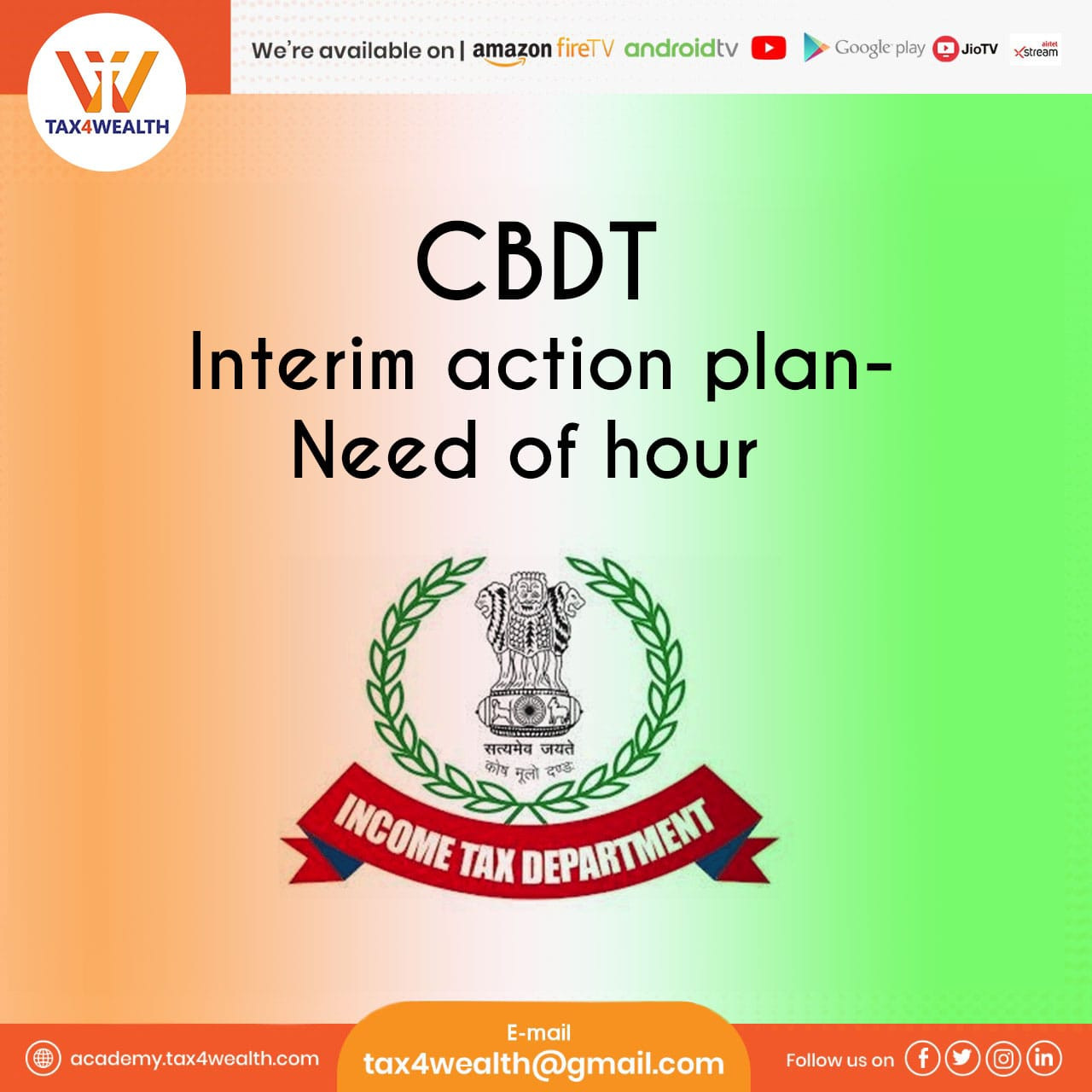 In the first quarter of the financial year 2020-21 on 8 May 2020, CBDT has issued and announced an  Interim Action Plan  directing the income tax department that it should not issue  any adverse communication with regards to payment of income tax to the assessee during the period of COVID-19 pandemic in the country. The Action Plan also suggest that the income tax department must wait for the fresh guidelines in this regard issed by the Board. Each year CBDT issued a Central Action Plan in a comprehensive manner for the first quater of the financial i.e. in the month f April and May by providing  some targets to the formation of the fields in the Key Results Area (KRA).

However, this year things are different and as a result of the unexpected situation arised in the country due to COVID-19, CBDT has issued a shorter Interim Action Plan for the first quarter of the financial year 2020-21 as compared to the past financial years. The main objective of the Interim Action Plan is to get ready  and prepared to work when then things returns to normalcy in the country hopefully sooner than the later.  It also act as a in-house cleaning mechanism.

Generally, a Centrail Action Plan which is considered as a vision document released by the CBDT every year providing a direction to the officer’s of the income tax department for certain actions that needs to be taken with regard to the Key Results Areas (KRA).  This also includes the target collection of the demanded arrears, arrears in demand reduction, management of litigation ( passing of appeal effect orders, scrunity assesssment related to tasks, disposal of different nature of application as made by the assessee, disposal of prosecution cases, disposal of appeals at the level of CIT, various reports preparation, audit objection settlement etc.) The time frame that is prescribe for the execution of the action can be anlaysed and emphasized in the Central  Action Plan.

Some of the main highlights of the Interim Action Plan is to debarred the income tax departement from the issuance of the communication to the taxpayers or assessee which can have an adverse impact on the taxpayer  or assessee during the first quareter of the teh current financial year i.e. 2020-21 till 30 June 2020.  Once the current situation in the country prevails, the Board  will accordingly issue fresh guidelines in this regard tentativley after  30 June 2020. Here, the term communication to the assessee refers to the compliance notice, scrunity notice, show cause notice, intimation for the adjustments etc according to the perspective of the income tax regime.

In this regard,  it has been noticed that the CPC has issued notices  under section 245 prior to processing of the return of income under section 143(1) in case any refund is due to the assessee.  Accordingly, the income tax department has informed all the assesseees that they should respond to notices as soon as possible so that refund can be processed immediatelt as the government has already announced to release all the refunds that are pending up to Rs. 5 Lakh during the current tough and hard time.

Hence, the aforesaid restrictions basically aims to prevent the income tax department from issuing any sort of show case notice or scrunity assessment or any smilar notice there to so that the panic among the taxpayers can be avoided.  Considering this, the  Interim Action Plan approaches the income tax department for the identification of cases where the notices under section 148 can be issued within dated 30 June 2020. However, it can be debarred the department from issuance of any further notice under section 148 untill further communication by the CBDT in this context. Apart from all of the aforesaid facts, it is also to be noted that the taxation and other laws including the (Relaxation of certain provisions) Ordinance 2020 has also increased the time limit  for issuing the notices from 31st March 2002 to 30th June 2020.

A few days ago  the IRS Officers Association had released known as “FORCE” and accordingly suggested  many hard and harsh measures so that it can boost the collection of revenue  with the increase in the surcharge and cess  with the introduction of some taxes which is already repealed. The government has already rejected some reports and refused its role in respect of making the aforesaid reports. Some disciplinary actions needs to be taken against some officers  in this regard. The department of tax has alraedy faced some huge criticism in those report  prepared by the IRS group of officers since the same created panic among the taxapayer during this time when the country is already facing a tough situation both economically and non-economically.

In 75% of cases in Final Settlement of Revenue and Internal Audit Objections, the objections was raised  till  31st March 2019. Likewise, about 50% of the objections was raised up to 31st March 2020. In most of the search cases, the eligible or qualified cases will be transferred to the central charge in the same city. In case there is a possibility of inter-city transfer is there, the same must be kept on hold. The officers of  income-tax  needed to dispose the rectified applications filed by the assessee by 30th June 2020. Further, the effected order will be passed in the cases which are eligible.

Further, the plan also provides direction for the disposal of the application under section 12AA or 80G of Income Tax Act, 1961 for the grant of the registration. The disposal of all the condonation petitions which were delayed in filing process in respect of Form 10  and Form 10B by 30th June 2020.  The CBDT has also allowed the extension for the compliance dates relating to switch to the new proceedure for registration as introduction by the Finance Act, 2020 starting from 1st June 2020 to 1st October 2020. All the grievances related to CPGRAMS which are more than 30 days old will be disposed of accordingly.  However, in the aforesaid cases, the specific time limit that is given was by 30th June 2020. Apart from all these, there are various other measures that are directed in the Interim Action Plan. An overview of the action plan for 2021-22 has been discussed in the below mentioned section.

An Overview of Interim Action Plan  issued by CBDT

The Key Result Areas and the prescribed time frame as mentioned in the Interim Action Plan for the financial year 2021-22 dated 10 June 2021 are given as under:

To sum up, it can be seen that the interim action plan of the Government of India has taken a major shift where emphasis has been given to qualitative measures as compared to quantitative measures.  Here, the focus has been provided more on the preparation and identification of cases as provided by the Directorate of Systems which can be picked for reassessment under section 147 of the Income Tax Act as a result of leakage of revenue.   In the past as well, there were numerous cases which came to WRIT courts basing on the ground for lack of jurisdiction by the assessing officers, in this regard there is a restrictive provision in the eyes of law to reopen the case and the record of success is that much encouraging due to weak groundwork done by the field officers including recording of exact reason which can be believed to initiate such a proceedings. This is a primary and basic requirement apart from the technical requirement for a lawful initiation of the proceedings.

While  there are number of cases are reopening can be litigated still basing on the merits of the case by the payer of taxes but the main objective of CBDT seems to have the basic proceedings and rights which are not required by the court of law basing on the technical grounds.  It is to be noted it may a case of reopening within and after the 4 year of the assessment year. This must cut the required time for the tax department, taxpayer and also the litigating courts in such matters in different levels and rounds.  The traditional example of this type of unending litigation is the latest decision of the Supreme Court that was concluded in April 2020 in the matter of NDTV. In this case, even though the Court has decided the matter for the reopening in the favor of the taxpayer on the ground of lack of jurisdiction as the disclosure of the materials by NDTV was not able to prove it reasonably in the first round of the regular assessment.  However, the court has handed over the aforesaid matter to the Authority of Revenue to reopen the case according to the provision of section 147 of the Act where it states that the officers are provided more powers to reopen a certain case. The aforesaid case can be avoided amicably if the reliance on the provisions was recorded according to the reason.

The other provision in relation to the records verification so that the rectification applications which are pending will be disposed off and impact of the same will be given by the tax officers to the appellate orders, in all the cases which are eligible. This can significantly help the taxpayers save time and have the pending refunds as determined by the tax officers. The Board has also ordered the officers to reconcile the all the demands year wise and PAN wise within the system and thus alternate demands can be removed.  This ultimately will help and a right step which improve the records quality and will keep the House in order, accordingly the time of both taxpayer and officers can be saved without litigating the ineffective and unenforceable demands and accordingly the courts also do not pay emphasis with the unnecessary stay of applications.

For an effective use of the period of lockdown, the Board has also ordered the senior officers for disposal of the applications that are filed by the trusts received as on 31 March 2020 to seek registration as per section 80G and 12AA of the Income Tax Act for income tax exemptions by 30 June 2020.  This can help to bring a certainty for the both tax payers and tax officers so that they can analyze the applications in details to make sure that all the activities of trusts are completely true and according to the requirement of law.  The aforesaid aspect is an essential considering the large impact and focus of CBDT to curb tax evasions and avoidance by the entities.

Section 194Q – Tax deduction on the purchase of goods and FAQs

GST Certification Courses 4
Your experience on this site will be improved by allowing cookies.