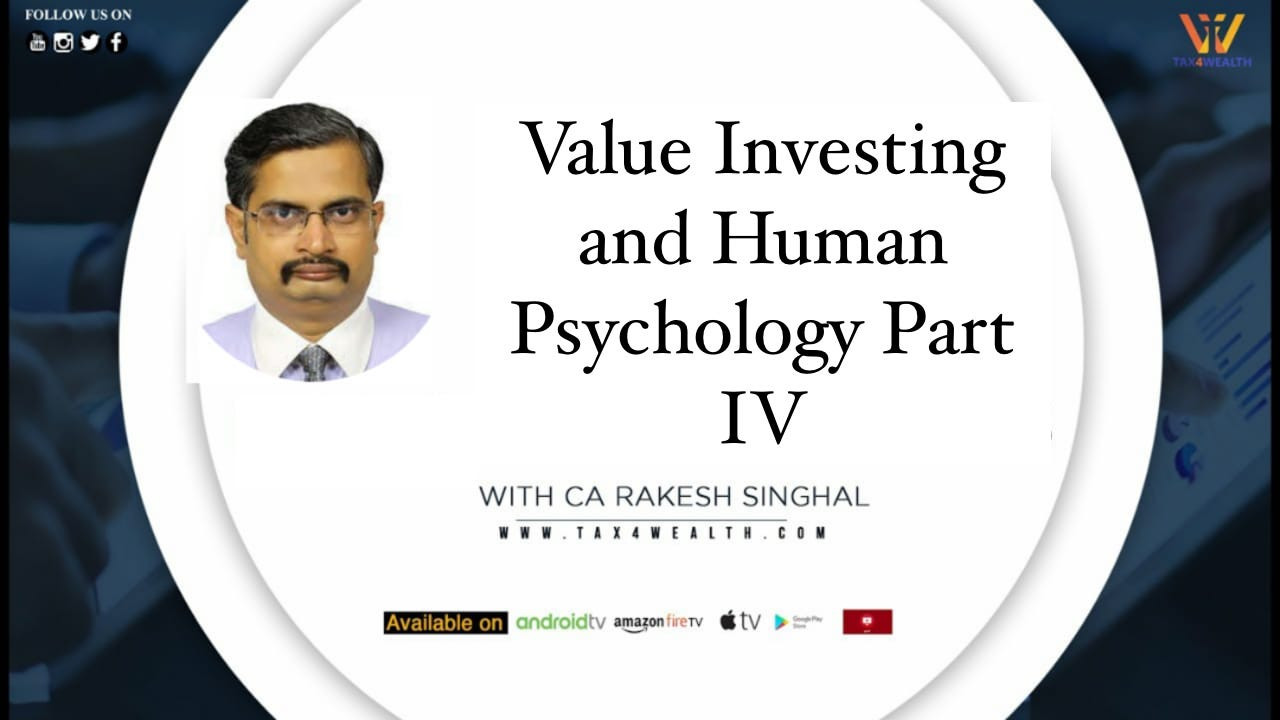 Now This :
To Be Aware of Biases which act as Obstacles to Investing According to the Principles of Value Investing or which influence our Investment decisions.

There are different kinds of Biases in Investing :

One of the most common behavioural biases in Investing is Herd Behaviour or Herding. Herd behaviour represents the behaviour of an investor to follow the actions and decisions of a large group of people, without analysing whether they are rational or irrational.

How to Avoid Herd Behaviour?

It is always advisable to not follow the herds. This is called the contrarian approach, wherein the investor does exactly opposite of what others are doing. When others are buying, the contrarian investor will sell, and vice versa.

Warren Buffett is the most successful example of contrarian behaviour. However, it is to be kept in mind that the contrarian approach is quite risky and must be practised with extreme caution.

The most suitable solution is for the investors to follow an individual, practical, well-researched approach.

The investors must remain balanced and rational, and follow the herd only after analysing the behaviour.

They must form their independent strategies and investment principles.

One of the most common emotional biases is the Status Quo Bias.

How to Overcome Status Quo Bias?

The investors can be shown the underperformance of a portfolio with inappropriate assets and asked to observe the difference as compared to a timely updated portfolio.

Keep evaluating the investments and purchases on a regular basis. By following a disciplined and active approach of portfolio management and investing.

Rebalancing the portfolio at regular intervals ensures that the investor does not remain stuck to where he was, and he realigns his investments with the market and his financial needs and preferences.

Overconfidence bias means that the individual is outrightly confident of his decisions and he overestimates or exaggerates his ability to perform a task. While confidence is good and necessary, the thin line between confidence and overconfidence is what demarcates right and wrong.

How to Overcome Overconfidence Bias?

Remember that financial markets are highly dynamic. Even the seasoned traders and fund managers, with access to the best reports and models, do not perform the best at all times. Therefore, it is very important to remain grounded and realistic.

The investor must look back at his losses and the mistakes he committed. This will help him remind himself that he does not know everything and even he can be wrong at times.

Instead of being strong-headed that a loss will be reversed and the market will come to the place they envisioned, the investors must learn to accept the mistakes and move on.

The recency bias involves focusing on recent or upcoming events rather than the long- run thesis. The investors with recency bias tend to use only the latest information and ignore the history.

How to Overcome the Recency Bias?

The most important way to overcome recency bias is by deliberately teaching oneself that the most recent information needs not be the most accurate information.

As a bottom line, it is critical for the investors to stay clear of the recency bias to ensure that they are able to look at the big picture and not take decisions based on the most recent colour.

Halo Effect is a cognitive bias that makes a person judge a person, product, or company based only on one or few characters of the person, product or company. It is the tendency which causes influence on one area, based on the impression created in another unrelated area.

How to Overcome the Halo Effect Bias?

The most important advice is to look at a company holistically. Even when the investor has a positive outlook towards a company, he should second-guess himself and keep looking for scenarios that may go wrong. The investors should not rely on tips given by the experts and form an opinion.

According to the Prospect theory, people value their gains and losses differently from each other. When a person is presented with two choices, one with respect to possible gains and the other with respect to the possible losses, he is more likely to choose the one suggesting gains, although the net results of both may be the same. This thought- process leads to the Loss Aversion Bias.

How to Overcome Loss Aversion Bias?

The investors must make conscious attempts to value gains and losses equally. By proper mental training, discipline in trading, and taking advice from the experts, the loss aversion bias can be reduced to a large extent.

Hindsight Bias is commonly known as the “knew-it-all-along effect.” It is a common perception bias. The people affected by the hindsight bias believe that the occurrence of an event in the past was predictable and obvious. However, in actual, the event was not obvious or predictable. It is the tendency to change one’s opinion after new information has been provided.

How to Overcome the Hindsight Bias?

It is a difficult bias to detect and measure, as most people are not aware that they harbour it. So, the first step is for the investor to accept and admit his susceptibility.

Rather than focusing only on the rightness of the decisions, they must also be prepared to accept that decisions can go wrong, and take this opportunity to learn and implement in the future.

Investors should have a realistic view of their own strengths and weaknesses, it becomes easier to improve performance and not make the same mistakes again. it is of paramount importance to remain rational while taking investment decisions. The research must be done thoroughly and all the decisions must be based on data and analysis, rather than memories and emotions.

Now This :
To Be Aware of Biases which act as Obstacles to Investing According to the Principles of Value Investing or which influence our Investment decisions.

There are different kinds of Biases in Investing :

One of the most common behavioural biases in Investing is Herd Behaviour or Herding. Herd behaviour represents the behaviour of an investor to follow the actions and decisions of a large group of people, without analysing whether they are rational or irrational.

GST 5
Your experience on this site will be improved by allowing cookies.