Section 68- A forceful Weapon in the Hands of Revenue 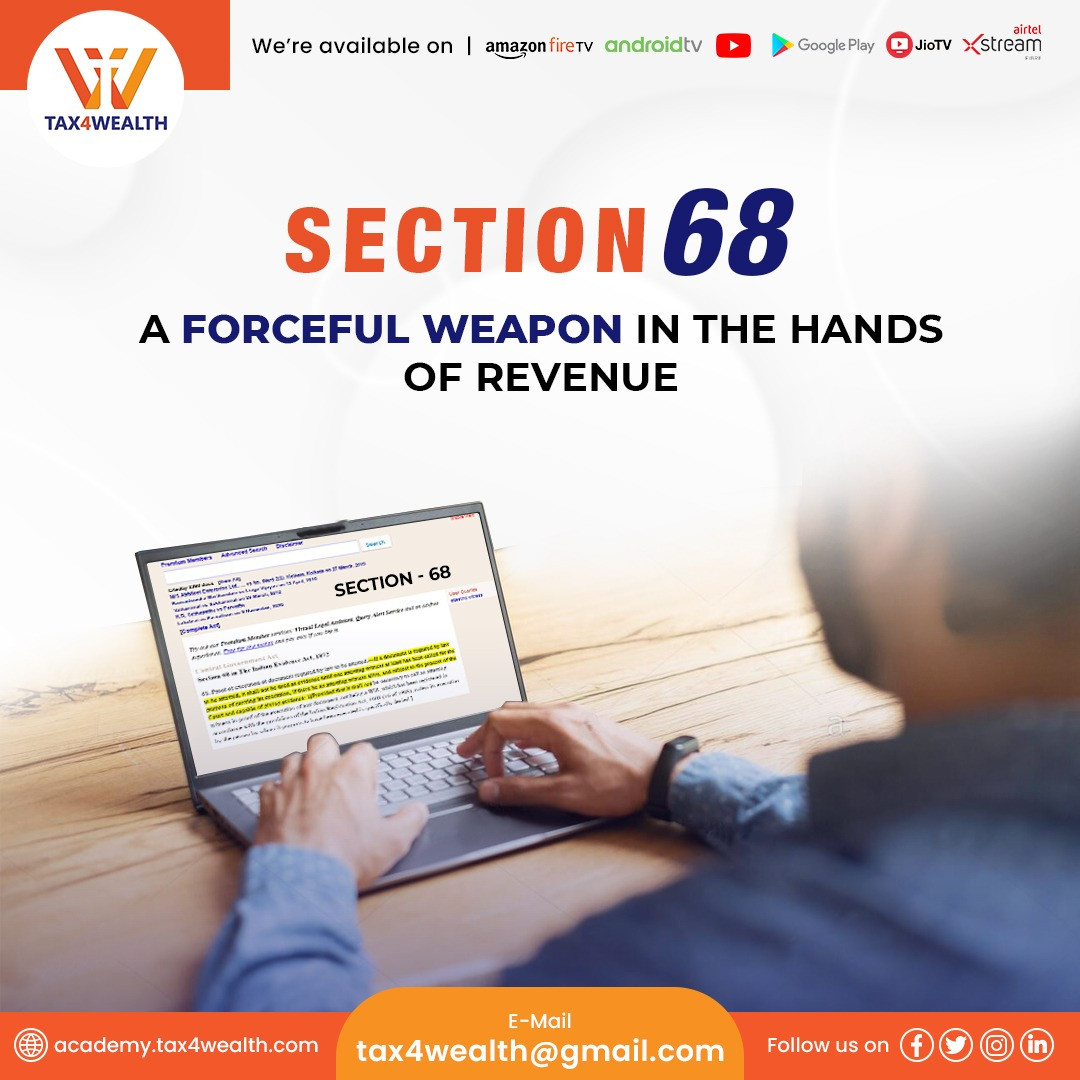 Section 68- A forceful Weapon in the Hands of Revenue

Basically, Income Tax is levied on incomes classified under five categories such as;

All of the aforesaid income categories involve revenue income except capital gains as it deals with tax on capital asset.  According to the basic rule of income tax, all income are taxable until and unless exempted. Generally, capital incomes are not taxable unless it is specifically comes under tax slab.  Any income generated or earned by a taxpayer is taxable in the financial year in which it is received or earned.

It is a very popular among the people to adopt measures for tax avoidance in order to save the outflow and accumulation of black money. Analyzing over the sustained and improved economic status over the years, the measures of tax avoidance has also been increasing at a faster rate with large amount of cash available with taxpayers.

Considering the above-mentioned scenario, it is very important for the Government to reduce such tax evasion and bring back all the money into the tax slab which has been avoiding and escaping the levy of tax. In the year 2016, the government took a biggest step of demonetization to avoid tax evasion. Apart from that, the government also introduced Income Disclosure Scheme (IDS), etc. However, Income Tax Act still has various provisions to track and loopholes in unexplained investment, unexplained cash credit, etc.

The credit of any amount to the taxpayer has to be offered to tax until and unless it is specifically exempted according to the provisions of Income Tax Act.  If the credit amount is not offered for taxation, the taxpayer has to offer an explanation of why the amount has not been offered to tax and also provide the details of source of such income.  Considering if the income is relevant or the same belongs to a third person (any person other than taxpayer) and it might be taxed by the third person.

It might be taxed by the third person as the funds may have diverted to the taxpayer with in intention to avoid tax. Accordingly, Section 68 of Income Tax Act, 1961 states that any amount credited in the account of the taxpayer in a particular financial year and the same is not offered to tax as the income during the said financial year of the below mentioned conditions are satisfied;

This type of credit is termed as unexplained cash credit.

Any explanation provided by a company in which public are not interested substantially with regard to the sum credited whether it may be share capital, share application money, share premium or any any such credit will be deemed as unsatisfactory unless;

However, the above-mentioned special provision is not applicable if the person in whose name the credit amount is recorded in the books of account is a venture capital company or venture capital fund according to Section 10(23FB).

The aforesaid special provision has been designed for corporate taxpayers to avoid tax evasion by the companies which are showing the names of the current shareholders or third party as already paid the money related to shares. This is a mechanism for saving the unaccounted money in the companies that are not subject to follow the regulation under the provisions of company law as compared to largely held companies.

As discussed earlier, unexplained cash credit is treated as an income in same financial year in which is it earned.  The tax rate of unexplained cash Credits is 60% flat rate without offering any advantage of basic limit of exemption, irrespective of the tax bracket.  Surcharge and penalty of 25% and 6% is levied respectively. Thus, the final rate of tax including cess will be 83.25%.

The following are some of the key points which need to be noted;

As a business receipt:

Normally, the amount credited in business books is considered as business receipt. When a sum is credited in the books, it is unreasonable to interfere that the same is revenue from business, in case an explanation is provided by the taxpayer of how such credit has been received is rejected by the authorities of income tax as untenable (Lakhmichand Baijnath v. CIT [1959] 35 ITR 416 (SC)).

Department is not required to locate source of receipt:

When the taxpayer has failed to provide any satisfactory proof regarding the source and nature of the credit and then it is found the amount is actually the income of the taxpayer in that case, it is necessary for the tax department to locate its exact source of income. (CIT v. M.Ganapathi Mudaliar [1964] 53 ITR 623 (SC)/A. Govindarajulu Mudaliar v. CIT [1958] 34 ITR 807 (SC)).

With regard to the deposits received from the tenant, it is in fact sufficient if the taxpayer provides the  proofs the source of income which includes the identity of the tenant and genuineness of the transaction under which the amount has been received. However, it is not essential for the taxpayer to provide proofs of the financial capacity of the tenant for making such deposit. (CIT v. Nevendram Ahuja [2005] 197 CTR (MP) 462).

If it is case of cash gifts which is recorded in the books of done, the showing of movement of amount through bank accounts and identification of donor may not be sufficient to prove the genuineness of the gift.  The fact lies on the capacity of donor to make such gift and his identity as well. In case there is nothing to show about the donor such as;

Some of the leading case studies in respect of gift under Section 68 are provided below;

Considering the above-mentioned points it can conclude that Section 68 is a forceful weapon in hands of generating revenue.

Section 194Q – Tax deduction on the purchase of goods and FAQs

GST Certification Courses 4
Your experience on this site will be improved by allowing cookies.